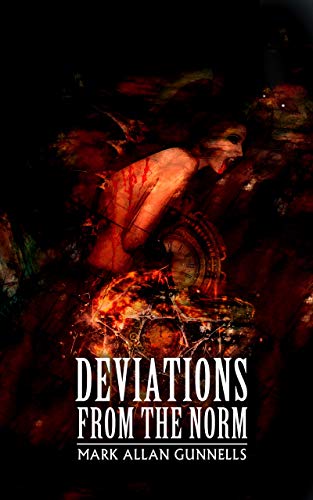 I love the novella format. I think it is almost the perfect length for many tales. Long enough to really develop the stories and characters, not so long that it wears out its welcome and starts to feel padded. As a reader, I’ve always particularly enjoyed when King has put out novella collections and was thrilled when his son Joe Hill followed suit recently.

And I’m thrilled to be offering my own novella collection, DEVIATIONS FROM THE NORM. Thematically, I took three familiar horror tropes (the vampire, the time machine, the deal with the devil) and gave them my own twists, hopefully making them fresh and unexpected.

In this blog, I want to talk specifically about one of the novellas and how it came to be. And that is my deal with the devil story, “The Price of Success.”

This is actually the one novella in the collection that I co-wrote with another author. My Canadian friend, Shane Nelson. I’ve known Shane for years, and he’s an incredibly talented writer. We had worked together once previously, on a piece called “Kindred Spirit” which appeared in my collection FLOWERS IN A DUMPSTER.

I knew I wanted to work with Shane again, and since our previous collaboration dealt with two writers and the relationship between them, we began to bandy about an idea of two writers who were friends, yet one was much more successful than the other. What kind of envy would this create in the less successful friend? Seemed ripe for a deal with the devil sort of plot, but I believe it was Shane who came up with the idea of Mr. Pyre, not exactly a devil but an entity born of fire and burning paper. As with any good deal with the devil story, the deal never turns out the way the mortal expects, so we were determined we had to find a unique resolution to the predicament that people would not expect. We did a lot of brain storming and I think we came up with something pretty original.

I always find the process of collaborating with another author to be both thrilling and instructive. I’ve walked away from every collaboration I’ve ever done a better writer, I truly believe that. This case was no exception. I had such a great time developing the story with Shane, discovering the characters, finding our way to the ending. I was actually a little sad when the experience was over.

Once we were finished with the story, I started thinking about publication. My initial thought was to include it in another short story collection, but the very next project I started was a vampire novella called “The Unholy Eucharist.” Thinking about these two novellas together, I got the idea to produce a collection of novellas that took familiar tropes and gave them new life. So I ended up with a vampire tale, a time travel tale, and this deal with the devil tale.

I am so happy to be able to present DEVIATIONS FROM THE NORM to the world, and I’m incredibly proud of the pieces I’ve gathered for the collection. “The Price of Success” is particularly special to me because I got to work with my good friend and I think we produced something that neither of us could have come up with alone, but something that is truly a melding of our two voices into a distinctive third.

Mark Allan Gunnells loves to tell stories. He has since he was a kid, penning one-page tales that were Twilight Zone knockoffs. He likes to think he has gotten a little better since then. He loves reader feedback, and above all he loves telling stories. He lives in Greer, SC, with his husband Craig A. Metcalf.

What Day Is It